No, I cannot give you directions to the Liberry!

But, I can give them to the library!  I saw that on pinterest the other day, and just thought that was hilarious!
Today, is Library Day.  Time to return books, and get more Junie B. Jones books for a week, and not read them.  :)  Well, technically, we read one or one and a half or so, and then they just sit.  Waiting for next Library Day.
Today is also Farmer's Market Wednesday.  Which, as I was talking to hubs last night, I hate it.  It's not my stuff that we're selling, it's his, and he doesn't get there until almost 5:30.  And it ends at 7.  So I'm there for half the time, at least.  And of course Luke is tired of it by the time Daddy comes.  I told him last night, I was leaving when he arrived, I needed to get away and just relax (it's been a stressful week or so!).  I've neglected to mention that we had a death in the family, and it just threw us for a loop here lately.
Posted by Frugal Girl at 11:25 AM No comments:

Credit cards the way of the dinosaur?
Click above for an article by Huffpost regarding Walmart and Target actually banding together to fight Visa.  Basically, it says that Visa and retailers have come to a settlement regarding the use of credit cards in stores. And, what I get is the biggest deal, retailers are allowed to charge more to those who use credit cards in their stores.  Now, I haven't done nearly enough research on it to be able to talk about it knowledgeably, but it seems on the surface a good  deal.  Right now, I'm paying approximately 3% extra on every single thing I purchase- whether or not I use credit cards.  If I pay cash, I'm giving Meijer, or Target or wherever, 3% profit.  So it's better for me to use my credit card.  If I'm paying for the service, I might as well use it.  HOWEVER, you can bet your rear end that if I got a discount every time I paid with cash, I'd be putting my plastic away, and paying with the Benjamins!  And, it would definitely cut down on my credit card debt!
Posted by Frugal Girl at 11:21 AM No comments:

And why did it take us 10 years to figure out we would be happier if we stayed at a hotel when we went to visit family? We are visiting Charlie's family this weekend because his grandfather passed away. Mom and dad have rescinded Charlie's welcome at their house, and I refuse to stay at his parents house. So we sucked it up and rented a room. Omg- so much better. I asked Charlie this morning why it took us so long to do this. Never again will we stay at a home when we come back to visit family.
I just don't understand the entire problem. My parents never really liked my husband but he's my choice. And now my mom is openly bashing him to me. Which, really? Yes, we have out issues, but you're just being a bitch. She blames him for everything- never once thinks it could be me. The other day I declined a call from her. She immediately called back and was like: why did he decline my call?
Seriously mom? Wtf.
It was totally me, I'm avoiding her calls. She got pissed at me for not telling her grandpa Ed died before she found out in the newspaper. Um, you don't tell me things, why should I tell you?
Posted by Frugal Girl at 9:35 AM No comments:

It's not supposed to melt!

Well, sweetheart, what else is it supposed to do?  :)  We had Luke's birthday party yesterday, and I bought a huge bag of ice, stuck it in a cooler for the party, and there's still a large chunk of ice sitting in it's bag.  And, of course there are holes in the bag, so it's melting out of the bag into the cooler.  Hence, what he said above.
Overall, the party was awesome.  Simple, barbeque with just his godmother and family, and a good friend of mine and Charlie's attended.  My parents are being immature, and avoiding seeing their only grandson because of Charlie (long story, they don't like him, and they refuse to talk to him anymore. Whatever, you're just hurting yourself.)  We ended up spending lots of time just talking, and hanging out.  It was so relaxing, and fun.  We don't get to see them often enough.  We've even starting talking about camping trips as a group again!  Which we haven't done since before Charlie and I got married.  So over 10 years ago.
So while Charlie is in church, I am at home with Luke, packing.  Because, oh yeah, Charlie's grandfather died last week, and the wake/service is today/tomorrow.  Fun.  It was super unexpected, he fell, and literally a few hours later died. And, now we're worried about his grandmother.  They were married 70+ years, and well, when you've lived that long with someone, you don't know what to do with yourself.
Posted by Frugal Girl at 10:57 AM No comments:

And, unfortunately, while trying to take pictures of stuff to sell on Ebay and Craigslist, I discovered that *SOMEONE* who shall remain nameless, somehow broke the screen to my digital camera. :)   Oops!  Actually, in all honesty, I'm not sure, there might be something jacked without it actually being broken, because I can see some screen shots if I hit certain buttons.  But I can't see pictures on the screen when I'm actually taking, them, only after they've been taken.  Weird.  And, then of course, Charlie rearranged the dining room, and moved the computer cord.  Yes, I'm well aware someone pissed in my Cheerios this morning!  :)  No, seriously, I'm not in a bad mood, it's just funny!
But seriously, we have two tomatoes.  I *think* they're ripe, they feel it, and look it, but they're definitely a darker variety than what we normally get in store.  They're more purple-y, which is great!  And since I'm making quesadillas tonight for dinner, they will make a perfect accompaniment.
Posted by Frugal Girl at 3:06 PM No comments:

Yes, it is a good Monday.  I had my Weight Watchers weigh in today, and I am down a pound and a half!  Whoo!!  And that's awesome because, well, I'm down, but, we visited friends on Saturday and , I kind of ate 4 meals that day.  Yeah.  So still being down after that 'binge' is a huge accomplishment.  It's funny though, when I look at that binge- I had a piece of pizza at Deb & Joe's house, and then Subway for supper on the way back,  that's actually not a lot of food.  Comparatively speaking at least.  Pre-Weight Watchers, I would have had several pieces of pizza in addition to the Subway.  So really, that's a success.  :)

We picked up our blueberries on Friday as well- 10 lbs of fresh picked from Michigan.  And we picked some wild blackberries this morning with more to come tomorrow morning.  We've also got some frozen strawberries, so I'm going to be making some mixed berry jam tomorrow and tonight.  I meant to pick up pectin today, and some more lids, but totally forgot.  :(  Oh well, my bad.  ;)  It's all in anticipation of our garden starting to give us more food.  We've already got the green beans producing, but, I've got my eye on the 5 tomato plants that are laden with green tomatoes.  They're all heirloom varietals, so I'm dying to try some, but want to wait until the're ripe! 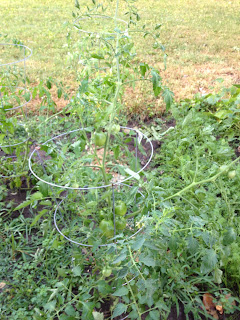