I've already decided I don't want to see my parents this weekend.

I'm supposed to take Luke up north to see my parents for the day, but they want me to take him up there for overnight, and I'm like, oh hell no!  I don't even want to go for the day, but I feel like I have to, since it's been since July since they've seen each other.  I've straight up told my parents I don't care if I never talk to them again, but mom is being all nice and sweet, except when she makes her little digs at me.  Whatever.  I'm only going for the day, since I have crap to do on Sunday.  I'm so not dealing with their drama.
I was reminded yet again this morning why I take what's said on internet boards with a grain of salt.  And actually kind of look at them for my amusement.  This mom posted about how there are these out of control kids at the bus stop.  I was like, well, they're not my kids, so I would do nothing.  Not my responsibility.  That kind of blew up to people saying they're getting bullied, it's the bus driver's responsibility to take care of  something that happened before they got there, and being called a witch.  I'm sitting here laughing, because everyone's getting all up in arms about it.  And I'm completely in the minority, because my child is never left unattended at the bus stop.  LOL!!  It just completely cracks me up, so I probably should go back and stir the pot a little.  :)
Posted by Frugal Girl at 1:30 PM No comments:

You know how Luke wanted an entire week of pinterest food?  Yeah, well, he's going to get 3 days!  Whoo!  I started combing through my food pins (all 2,000+), realized 1500+ are desserts, and narrowed it down to 3 basically simple, affordable menus that I don't have to do a ton of extra shopping for.  Because I'm all about not spending extra money on something that I might hate!  It's happened before- buffalo chicken in the crock was NOT a success, no matter what anyone says!!  :)

One day, we're having bacon/apple/cheese quesadillas.  Another day we're having Sausage and Bean Soup with Pasta, and the first day we're having loaded baked potato soup in the crock.  I'm pretty excited!  I will post pictures as we have them- I promise!!
Posted by Frugal Girl at 12:13 PM No comments:

It's a reflective kind of day.

Of course, it's September 11, and that's a day that always makes me reflect on what I was doing 11 years ago today, and how much the world (and I) have changed.
I have a child now- I think that in itself makes you wonder what kind of world we've created for our children.  But, the attacks on the World Trade Center makes it even worse, somehow.  Like, we've created this life, and we're showing him/her the WORST of people.  Seriously.  Luke doesn't know a lot about it, he's seen a few pictures, but he's not really shown an interest in it, and we're going to keep it that way for as long as possible.  I don't think he needs to know in detail what happened.  And, unless he asks about it, we're just not going to mention it.  Say what you will about that decision, it's ours.
We've been married over 10 years now, and really, this pin says it all. 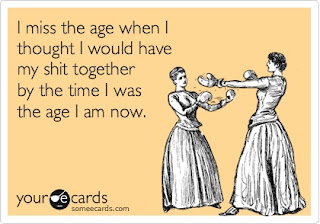 Overall, we're happy though, and that's all that matters!
Posted by Frugal Girl at 3:36 PM No comments:

Email ThisBlogThis!Share to TwitterShare to FacebookShare to Pinterest
Labels: 9/11, family

Luke is pseudo-addicted to Pinterest- in other words, he likes looking at the pictures, and tells me what to pin.  He's all into the food/recipe pins, as am I.  So we've started looking over all the recipes, and trying to work up a weekly menu using nothing but things we found on Pinterest.  Sounds like fun, yes?
I think I'm going to start that next week-I've only got 1400+ food/menu planning pins to go through.  :)  Nothing major!  ;)  I will definitely post pictures and stories about our pinterest week, and successes and failures.  :)
Posted by Frugal Girl at 11:35 AM No comments: